Located on the Berkshire Downs in the famous racing village of West Ilsley, Keeper’s Stables is picturesque and tranquil racing yard with some of the finest and most famous gallops in the country, making it a fantastic place to have a horse in training. Pictured right is Miss Marjurie winning Group 3 Pinnacle Stakes at Haydock 30th May 2015
Find out more about the yard and Denis Coakley…

Irishman Denis was born into racing, working with leading trainers around the world and he was a successful professional jockey before commencing his training career in 1999.
See our race entries and recent results… 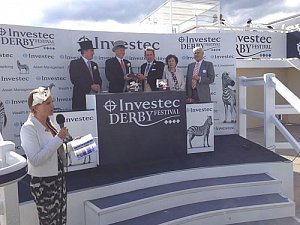 Trainer Denis Coakley runs a small team with big ambitions, maximising the potential of each horse in the yard.

Find out more about racehorse ownership with Denis Coakley.

There is an Owners’ Party held in October - If you are interested in racehorse ownership please contact us for an invitation. This year the yard will be taking part in the National Racehorse Week, opening the stables on Sunday 12th September 2021, from 12 noon until 3pm. This is an opportunity to wander around the yard and chat to Denis and others caring for the horses at Keeper’s Stables 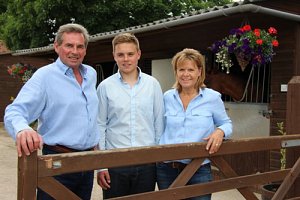 Denis, Barbara and Charlie Coakley pictured here at the yard.  Denis Coakley Racing is very much a family business.

Go to websites for Racing Post or At The Races for up to date statistics.