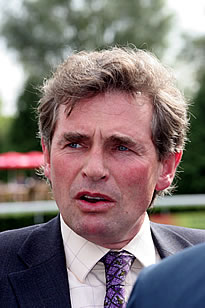 Denis started training from Keeper’s Stables in 1999, renting the yard from Lady Huntingdon following Lord Huntingdon’s retirement that year. Drawing on all his experiences, Denis’ hobby remains his livelihood, extracting every horse’s individual potential. Amongst his best horses to date have been :

Denis, from County Cork, was born into racing and rode on the Pony Racing circuit from an early age before progressing through the junior ranks of show jumping to point-to-pointing, riding his first winner at the age of 17. With a hunger to widen his experience, at the age of 20 Denis moved to an Australian stud farm. It was whilst in Australia that Denis first joined up with Lord Huntingdon at Warwick Farm, Sydney.

A year later and a return to the UK saw Denis take the job as Gordon Richards’ conditional jockey, soon losing his claim and becoming a fully fledged member of the professional ranks. With an urge to travel once again, Denis then moved to the States where he rode as stable jockey for 3 years to Janet Elliot, Champion Jumps trainer and spent time with Neil Drysdale, Champion Flat trainer. 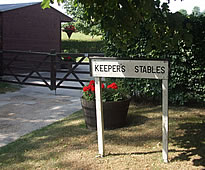 In 1988 Denis’ links with Lord Huntingdon came to the fore once again, when he was asked to return to the UK as Lord Huntingdon’s Assistant Trainer. Together they formed a formidable team, firstly in Newmarket and then in West Ilsley when Lord Huntingdon became the Queen’s trainer at West Ilsley Stables. During these years Denis proved to be an integral member of the team responsible for such horses as Indian Queen and Drum Taps.

West Ilsley is home to some of the country’s finest and most historic gallops. These gallops have provided the training grounds for such greats as Brigadier Gerard and Nashwan, amongst 3 Derby winners, 3 Ascot Gold Cup winners and numerous other Group winners.

Nestled in one corner of this picturesque Ridgeway village lays the tranquil Keeper’s Stables. Currently standing at 25 boxes, each horse is guaranteed 5 star individual treatment. Using only the best bedding and feed, combined with regular turn out sessions ensures the horses are kept sound in mind as well as limb.

Keeper’s Stables has access to a goldmine of gallops, from the 6 furlong all-weather to a plethora of grass gallops, ranging from 5 furlongs to 1 ½ miles; every horse can be trained just as he or she needs.