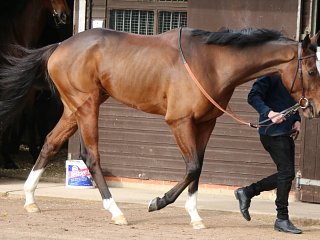 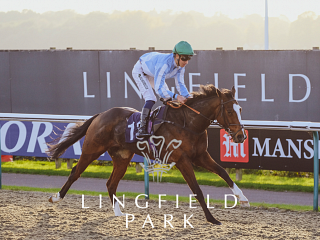 Three horses returned to racing yesterday at Lingfield after significant breaks through the summer. The highlight was saved for the last race as James Kerr's summer acquisition Wonder Starelzaam made very light work of winning just as he liked in an apprentice handicap under a fine ride from George Bass. Breaking well in the middle of a group of five setting a fairly strong pace, George then moved 'Wonder S' into an outside position on the flank of the long time race leader as they turned in. When asked for his effort up the finishing straight, Wonder Starelzaam opened up well to ease clear and win comfortably by three lengths, and almost the same back to the third. Pictured here from the recent owners party he was clearly in great order to delight long term supporter and friend James Kerr with a fine win. Earlier Waterloo Sunset ran a nice race, held up by Hollie Doyle and racing in the rear through the better part of a mile. A little short of room turning in he then ran on very well inside the final furlong to finish seventh and beaten almost as many lengths - a promising return which he will benefit from next time out. Juanita competed in a seven furlong race for Aoife Dunphy and was taken forward early to race prominently under jockey Hollie Doyle, but she was obliged to go three wide and became a little outpaced as the race developed into the straight. Juanita weakened a little through the final furlong to finish sixth, but she will certainly come on for the run and continue to strengthen up for her next outing.