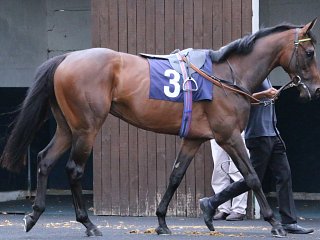 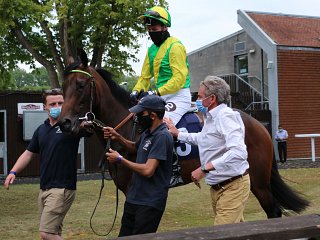 Supersonique was unable to travel to Lingfield yesterday after sustaining a cut to her leg, so she was rather sore and lame and consequently declared a non-runner. Eagles Dare took his place alongside nine rivals in the first division of his maiden race, and made a good job of his track debut to finish off his race very strongly. From his draw in 9 of 10 Tom Queally looked to move inside straight after the break, but he was soon crossed and slightly baulked from the horse drawn outside him - the eventual winner - who then took a very erratic line through the first two furlongs. Into the first bend Eagles Dare had settled into a better rhythm, having shown some anticipated greenness in the first part of the race. Still seventh after the downhill run from the 4 to the 3, Eagles Dare really got the hang of things down the straight, despite being taken a little to his right across the track by the line of the first and third horses. Tom got him to move nicely into the final furlong, really picking up well in passing two others and very nearly taking fourth by the line. Ultimately he was placed fifth, and beaten only three and a half lengths behind the winner. Overall he gave a very pleasing first race performance and he will have learned a lot from the experience on a sharp enough track - so that a chance on the turf may beckon soon and should see him progress to very good effect for the Keeper's 12 syndicate.